It’s time for another edition of 23 PAWS, hosted by Cinnamon at Eat, Pray, Tri.

Since I like write a round-up post on Fridays, I decided I’d do a gift idea round-up.

These are some ideas of practical must-haves for dogs.  I don’t treat Kostas with gifts but keep it pretty simple with at least making sure he has a bone and a full treat jar.

If you have a shedder, make the investment in a FURminator.  This tool basically cuts/scrapes the dogs top and under coats off and leaves piles of fur.

Kostas is very good about being “FUR-minated” – he sits and lets me scrape his back and pools of fur and fluff just fall off.

Safety is a concern when walking a dog in the evening.  Safety for the owner and the dog.  An Orvis reflective collar is a helpful accessory.   This is on my to-buy list because Kostas’ reflective banana is starting to wear out. 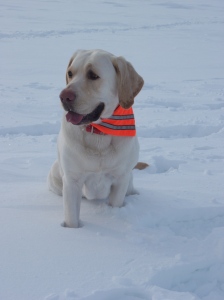 It’s important to keep a dog’s teeth clean and a good way to do this (if you don’t want to risk losing a finger by brushing their teeth), is to let them chew on a Nylabone. Kostas is a big fan of the big bones that keep him entertained.

And finally, what dog doesn’t love a treat?  I started buying Milk-Bone Healthy Favorites Granola Biscuits with Real Beef and Kostas loves them.  They are made with real ingredients and do not have corn/soy fillers.

Pet owners – do you buy your pet(s) a holiday/birthday gift?

*Note:  I have received no compensation from companies/products listed in this post.  I’ve purchased these items with my own $ and opinions are my own.

Cinnamon at eat, pray, tri has started a link-up party about pets––23PAWS

An excuse to write about Kostas and Tucker?  Sign me up!  In February you got to “meet” Tucker so now it’s time to give Kostas the spotlight.

Breed:  Labrador (he’s HUGE so I wouldn’t be surprised if there’s some Great Dane in there somewhere) 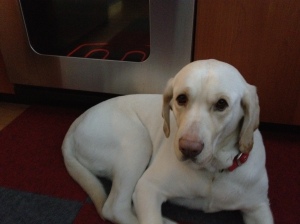 Kostas is also very motivated by people and saying hello to everyone he meets.  I sometimes refer to him as the Wal-Mart Greeter because we’ll be waiting at a cross walk, he’s sitting, and as soon as people stand near us, he immediately wants to say hello and give kisses. 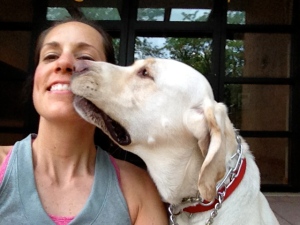 Always ready with a big, slobbery kiss and his breath could peel paint off walls

Kostas came into my life almost 5 years ago–my first dog was Murphy.  A loving and loyal Golden Retriever/Lab mix.  Murphy and I were pals for 8 years and he was already “senior” when I adopted him so by the time his health was declining, he may have been 14 years old.  Putting him down was a difficult decision the right decision.  I knew I’d want another dog and I found Kostas right away.

I used to drive by the Humane Society on my way to and from work everyday and would look at the available dogs online.  When I saw “Cocoa” (crazy name for a white Lab) I knew I had to meet him.  Kostas was surrendered by his first family on his 1st birthday.  The shelter adoption counselor told me that the family said they were moving but her sense was that he was too big and energetic for them.  He was perfect for me.  I still find myself thinking how could someone not have loved this guy? As soon as I met him he showered me with kisses and sat in my lap.  Oh, did I mention that Kostas thinks he’s a lap dog? 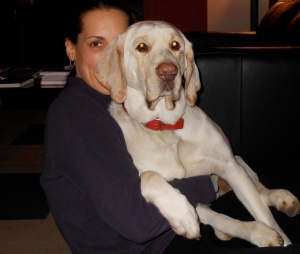 I’m happy to be Kostas’ “forever person”–he has such a big heart (and big ears) and is quite a character who makes me laugh everyday. He’s always by my side (well, when he’s not sleeping) and often in my way (in a cute, adorable way) and always reminds me to live, laugh, love.

Trying to do Pilates with a Lab in my lap

I should mention–I decided on the name Kostas because I was in Greece prior to adopting Kostas.  Basically everyone who worked at the hotel I was at was named Kostas, and my Kostas is named after my favorite friendly Greek Kostas.  It often takes people 1 or 2 tries to get the name correct and I often have to say, “No, he’s not named after Bob Costas.” 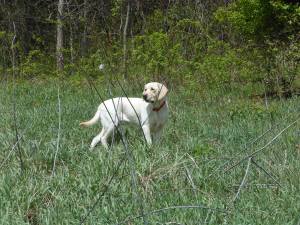